King Thurman and his Castle 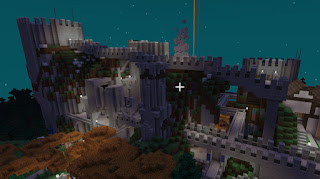 The castle of King Thurman was a vast and magnificent structure, built on the highest point of the city of Thurman. It was a symbol of the wealth and power of the Nation of Thurman, and a testament to the vision and leadership of its ruler.

The castle had been built many centuries ago, by King Bergskog, the great-great-grandfather of King Thurman. Bergskog had been a wise and visionary ruler, who had united the scattered tribes of Thurman under his banner and had brought peace and prosperity to the land. He had chosen the highest point in the city as the site for his castle, believing that it would be the most defensible and the most awe-
inspiring.

Over the years, the castle had undergone many renovations and expansions, as new kings and queens had added their own touches to its design. King Sanchez had strengthened its walls and added a moat to protect it from invaders. Queen Lillian had built a beautiful garden within its walls, filled with exotic flowers and trees from all over the world. And King Herman had built a great hall for hosting banquets and ceremonies, as well as a library for storing the kingdom's most precious books and documents.

But it was King Thurman who had truly made the castle his own. He had added a tower for studying the stars and observing the weather, as well as a workshop for tinkering with mechanical devices and inventions. He had also built a large and luxurious living quarters for himself and his family, filled with the finest furniture and decorations.

Despite all its grandeur, the castle of King Thurman was more than just a symbol of power and wealth. It was also a place of learning and culture, where scholars and artists from all over the kingdom came to share their knowledge and talents. And it was a place of refuge and safety, where the people of Thurman knew they could always find shelter and protection from the dangers of the world.

For many generations, the castle of King Thurman had stood as the heart of the Nation of Thurman, a beacon of hope and prosperity for all its people. And as long as it stood, the people knew that their kingdom was strong and their future was bright.